ANT Group, the FinTech giant you may not have heard of, are going public

The ANT Group’s, an Alibaba Group affiliated FinTech and payments giant, listing of its shares on the Hong Kong and Shanghai exchanges has been delayed passed the initial date of early November. The company already has records under its belt – in 2018, it raised $14 billion in the biggest-ever single fundraising by a private company at a $150 billion valuation. This time, Ant Group is expected to raise the largest amount ever in an initial public offering (IPO) as they are looking to bring in at least $35 billion, which would value the company at $250 billion. The current record is held by Saudi Aramco, who raised $29.4 billion.

We have analysed ANT Group’s patent portfolio by grouping families with similar characteristics into technology clusters: 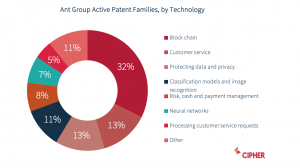 The largest cluster in the ANT Group portfolio, which makes up 32% of their patent families, is the ‘Block chain used in privacy, data transfer, contracts and risk identification’ cluster. This reflects the company’s latest initiative Trusple, a blockchain-powered global trade and financial services platform, aimed at making it cheaper and easier, especially for SMEs, to operate and sell wares worldwide while also making it cheaper for financial institutions. Another cluster worth mentioning is the second largest, which relates to information gathering through customer support and gathering data on customers’ opinions though text segmentation, voice and speech. Understanding customers’ wants and needs is likely an aspect which has enabled Ant Group to become a major player in the Chinese payments market.

ANT Group also sits on many assets relating to security and privacy. How data is managed and kept safe is crucial in a solution which is integrated in so many aspects of a user’s financial life. Other clusters relate to personalisation of content and memory management, as well as payments management.

Download the full report on the ANT Group’s patent portfolio below:

How is technology supporting the global drive to achieve agricultural sustainability and who are the key players prioritising investment in this area?

Analog Devices acquisition of Maxim Integrated confirmed in an all-stock transaction valued at US$21 billion. What does this mean for the analog semiconductor industry?

Episode 2, Season 1
Stoytelling with data is the second episode of the podcast series Cipher Vision.

Who are they key companies influencing the diagnostics and drug development patent landscape and how is AI revolutionising this space?