The consensus view is that the ideal patent portfolio would protect the future revenues of the business. In the simple case, where a company has 5% of the global market in a specific technology, it should own 5% of the patents. Anything else would not adequately protect the company if approached by a competitor for a cross-licence and would not suitably deter new entrants from entering the arena. 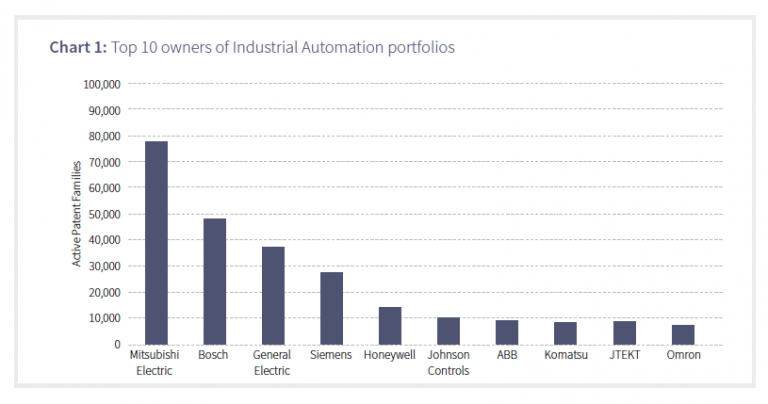 We announced the development of Cipher Industrial Automation at IPBC Europe earlier this month. This explains why we think an industry-specific solution is required and provides some of the analysis in support.

The top 50 industrial automation companies own more than 350,000 active patent families and the costs of simply obtaining and maintaining these assets exceeds $1 billion per annum. As we sit at the dawn of the fourth industrial revolution (Industry 4.0), the most frequently asked question is how many is enough?

This is not an easy question, but as patent budgets come under increased scrutiny, it is often not an easy question to avoid. It is also not unique to this sector, and for this reason, we explore the basic challenge and illustrate by reference to technologies from the Industry 4.0 domain.

At times of epic disruption from technology, all sectors face the same systemic threat. Technologies that have been core to the sector’s value proposition, change. Think internal combustion engines for cars. The consequences are always the same. The incumbents are placed under massive pressure to innovate, while technology companies reap the benefits of having invested ahead of the curve. The additional reality is that while the barriers to entry for capital intensive industries are huge, the game changes when the solution is rooted in technology – the reality exemplified by Uber, Spotify and Airbnb.

The problem with patent landscapes

The common approaches to establishing who owns the patents relating to a specific technology are manual search or outsourcing. Each has its own problems. Conducting a search using conventional software welcomes you into the world of Boolean pain, where quality results are dependent on a manual struggle with keywords and patent office codes. Outsourcing involves the expense, delay and inconsistency that is familiar to all. The problem is that because the information required is so slow and expensive to extract, IP teams have only recently focussed their attention on the power of patent intelligence.

The promise of AI

Artificial Intelligence and machine learning technologies sit at the heart of automating everything from book recommendation engines to voice recognition to brain scans. Chart 2 represents the Top 20 owners of AI patents. Sure enough the US tech majors are well represented, as are their Chinese, Korean and Japanese competitors. What this chart does not communicate are the 1500+ other owners of AI patents.

“It is somewhat ironic in a universe of over 7,000 AI patents, the task of identification of them is commonly left to manual search.” Steve Harris, CTO, Aistemos

This chart was generated automatically using a Cipher AI classifier. 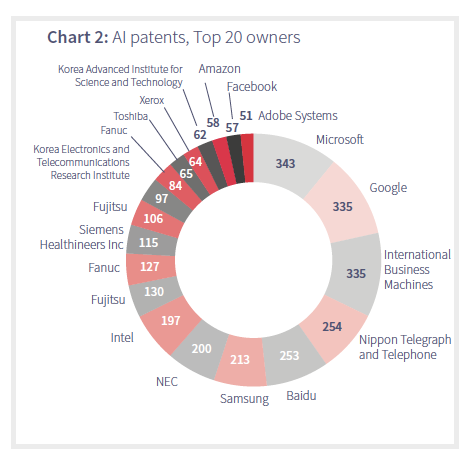 3D printing is not one-dimensional

3D printing tech has been around for many years, but there has been a massive increase in published patent applications over the last few years as shown in Chart 3. Automated patent intelligence eliminates the friction in analysing global trends or switching to an analysis of top owners, below in Chart  4.

The answer to who’s doing what in robotics? is unlikely to deliver actionable insight in most situations. Chart 5 is illustrative of the level of granularity required for most strategic IP decisions.

So while a rough cut of the data suggests that Fanuc is the dominant owner of robotics patents, only with patent intelligence is the focus of Rockwell Automation in HMI revealed.

“Overall, the picture is clear. Industry 4.0 is not one thing but many. No one company will be able to dominate or control from an IP perspective. This means an era of greater collaboration. Patents will be an essential currency in many of those relationships.” Nigel Swycher, CEO, Aistemos

Patent Intelligence – Time for its own revolution

Answering the question how many patents is enough? requires continuous alignment with your own corporate strategy and calibration to the activities of your competitors (and other owners of relevant patents).

The evidence suggests that the grit in the wheels is the current level of inefficiency in the methods of accessing the information critical to the decision making process. Strategic patent intelligence, with its ability to automatically tag patents to technologies, is proving itself to be a welcome solution to this problem.