The pandemic has highlighted the value of high-quality video streaming, for both work and entertainment. This makes it vital to understand the complex patent licensing landscape. Cipher helps some of the world’s leading innovators, patentees, implementers and adopters improve their decision making and results by taking advantage of the best data analytics.

The first version of the High Efficiency Video Coding (HEVC) standard, also known as H.265, was approved in 2013. It succeeded the Advanced Video Coding (AVC, or H.264) standard, and offers significant improvements in resolution and efficiency.

While it took a while to be accepted, HEVC has now been adopted in many devices where users need to maximise the video quality while minimising bandwidth usage, such as smartphones, tablets, televisions, games consoles, cameras and computers. And video streaming (including high-resolution video) is essential for many applications today: the number of HEVC-enabled devices increased from less than 400 million in 2015 to over 1,750 million in 2020, according to Velos Media.

But the patent position regarding HEVC is unusually complex. As in other standards-based technologies, patents declared to a standard are licensed on fair, reasonable and non-discriminatory (FRAND) terms. There are many thousands of patents declared essential to the standard, owned by many different entities (see figure 1) and registered in many different jurisdictions (figures 2 and 3). 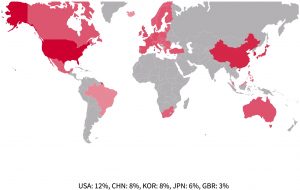 Patent pools make it easier for implementers of the standard to obtain licenses by paying one royalty for access to SEPs from multiple patentees. However, while earlier video standards typically had just one pool of essential patents which had to be licensed, for HEVC there are three pools:

To complicate matters further, some patent owners are part of more than one pool. And there are some significant patent owners who are not members of any of these pools (including Nokia, Microsoft and TI)

This complicated position poses challenges for both licensors and licensees. Licensors need to identify which pool to join (if any) and monitor the enrolled patents – particularly if considering acquiring or selling portfolios. They also need to ensure they obtain appropriate value for their patent rights, identifying which are essential to the standard and deciding how to license and enforce them where necessary.

Licensees meanwhile must identify which pools they need to join, or an alternative strategy to obtain the necessary rights, and ensure they allocate budget appropriately. Not paying sufficient attention to this puts you at risk of infringing patents – and there are signs that SEP owners are asserting their rights more readily. For example, SEP owners such as Nokia and Ericsson have both brought actions against manufacturers of devices incorporating HEVC technology. Nokia recently announced settlements with both Lenovo and Samsung: although the details are confidential, they reportedly include licenses to patents relating to video standards.

A second challenge for licensees is royalty stacking: the risk that the cumulative costs of licensing patents make implementation unprofitable. Licensees need to be asking questions such as: what is the technology worth? Where is the value? How is it divided? And what is a fair price? But getting answers is hard, especially for SMEs who lack experience of licensing patents and negotiating royalties.

For both licensors and licensees, the key to successful negotiation is having a comprehensive picture of the patent landscape, with analysis of where the value lies.

The successor standard to HEVC – Versatile Video Coding (VVC) or H.266 – was completed in July 2020 and patent pools are now being discussed. VVC, which will enable more efficient 4K broadcast and streaming, is likely to be implemented in devices within the next few years. That means the time for patent owners to capture the value in HEVC patents is now…

Our analysis can provide data and charts to bolster your position and tip discussions in your favour, giving you a comprehensive picture of the landscape and promoting transparency. Tailored reports enable you to obtain a realistic picture of your position, and ensure you are well equipped when entering licensing negotiations. With this analysis from non-partisan patent data for HEVC SEPs you can discover where the value is in HEVC portfolios.

Find out what this analysis looks like by filling out the form below or contacting us directly.

Find out how Cipher can give you an independent view of the HEVC SEPs landscape by downloading this sample report, including:

HEVC standard essential patents, you can be confident about your licensor and licensee information
Read more
prev
next

We put a lens on the invention and innovation being made in critical technologies powering the energy transition. This analysis has been done using Cipher’s Universal Technology Taxonomy.
Read more

See how patent owning organisations such as ARM, Infineon and Facebook deal with patent risk and why patent risk management is crucial to protecting your organisation’s greatest asset.
Read more

ESG investing—a strategy that involves weighing the environmental, social, and good governance impacts of investments when making key business decisions. We look through a patent lens at sustainable technologies of the future.
Read more

Some 8 billion metric tons of plastic has been produced over the past 50 years. How is technology positively influencing the next 50 years and providing a more sustainable solution?
Read more

82% of patent owners will face patent risk in the next two years. Read the Key Findings of our global Patent Risk Survey to discover how IP professionals deal with patent risk.
Read more
prev
next

Justify patent budgets to CFOs and communicate the impact of your investment.